Buerger's Disease, also known as Thromboangitis Obliterans( TAO), involves the small and medium-sized arteries. It may also involve superficial veins of the extremities. Rarely, and in advanced disease, it may involve vessels in other parts of the body.

This disease was first reported by Buerger in 1908, who described a disease in which the characteristic pathologic findings - acute inflammation and thrombosis (clotting) of arteries and veins - affected blood vessels of hands and feet.

Buerger's Disease occurs most commonly in men aged 20 to 40 who also smoke. The exact cause is unknown, but the relationship of smoking with progression of disease is apparent.

Who gets Buerger's Disease?

The classic Buerger's Disease patient is a young male (e.g., 20-40 years old) who is a heavy cigarette smoker. More recently, however, a higher percentage of women and people over the age of 50 have been recognized to have this disease. Most commonly seen in the Orient, Southeast Asia, India and the Middle East, it appears to be rare among Africans and Americans.

Onset is gradual and begins in the small vessels (affecting toes first). Sensation of coldness, numbness, pricking, tingling sensation and/or heightened sensitivity of the foot or pain confined to one toe are typical symptoms. Raynauds's phenomenon [condition characterized by numbness due to sudden spasm in small blood vessels of fingers] is common. Pain while walking, relieved by resting may occur (usually in the arch of the foot or the leg, but rarely the hand, arm, or thigh.) Pain becomes persistent as the disease progresses to more severe arterial blockage causing ulcerations and pre-gangrenous or gangrenous changes. Progression to the acute ischaemic stage usually occurs in patients who continue to smoke and may produce so much damage that amputation is necessary.

Physical examination will reveal diminished or absent pulses in one or more of the pulses in the foot. Color changes can also be detected during certain physical maneuvers. Non-Invasive vascular studies can detect a decrease in blood flow and pressure in the toes, foot, and/or fingers.

Buerger's disease can be mimicked by a wide variety of other diseases that cause diminished blood flow to the extremities. These other disorders must be ruled out with aggressive evaluation, because the treatments may differ substantially from that of Buerger's Disease (for Buerger's, there is only one treatment known to be effective: complete smoking cessation - see below). So diseases with which Buerger's Disease may be confused include atherosclerosis (build-up of cholesterol plaques in the arteries), endocarditis (an infection of the lining of the heart), other types of vasculitis, severe Raynaud's phenomenon associated with connective tissue disorders (e.g., lupus or scleroderma), clotting disorders of the blood, and others. 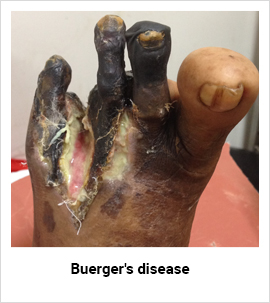 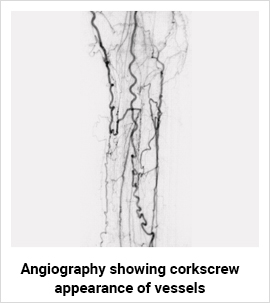 Angiograms of the upper and lower extremities can be helpful in making the diagnosis of Buerger's disease. In the proper clinical setting, certain angiographic findings are diagnostic of Buerger's. These findings include a "corkscrew" appearance of arteries that result from vascular damage, particularly the arteries in the region of the wrists and ankles. Angiograms may also show occlusions (blockages) or stenosis (narrowing) in multiple areas of both the arms and legs.

The cornerstone of treatment is to stop smoking completely. In addition the treatment also focuses on removing all factors that may reduce blood supply