What is Deep Vein Thrombosis?

Deep vein thrombosis (DVT) is a condition in which blood clots form in the deep veins of the body. The word thrombosis means forming a blood clot. The clot itself is called a thrombus.

A blood clot is a jelly-like mass of congealed blood. Clotting is the normal way the body stops bleeding and begins healing following injury. Once the clot has done its job, the body absorbs it. Sometimes, however, blood clotting can prove harmful.

DVT occurs when a blood clot forms in a deep vein and remains there.

DVT usually involves the formation of a large clot in the deep veins in the lower legs and thighs. In rare instances, DVT can occur in the area around the armpit and collar bone (axillary-subclavian vein thrombosis), in the upper arm, abdomen, pelvic region and brain.

It is a dangerous condition because the clot may become dislodged from the vein and travel inside the vein all the way to the lung, where it may get trapped and block a vessel in the lung. This is called pulmonary embolism, which can be deadly. 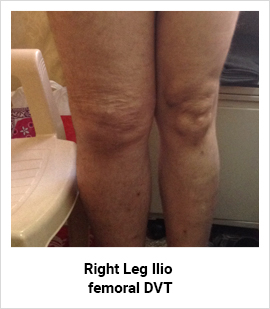 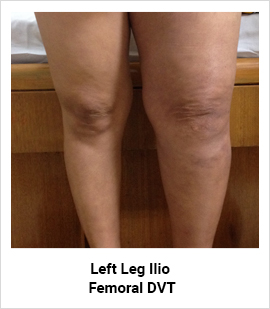 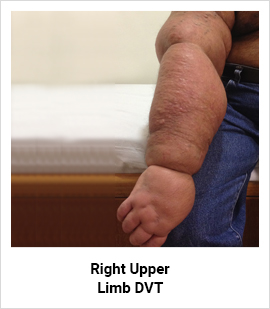 Duration of anticoagulation in DVT 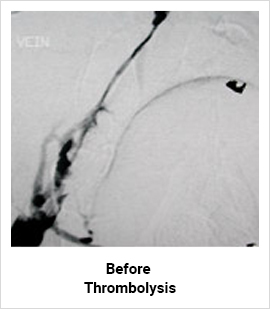 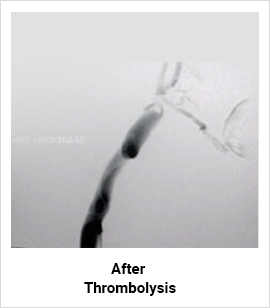 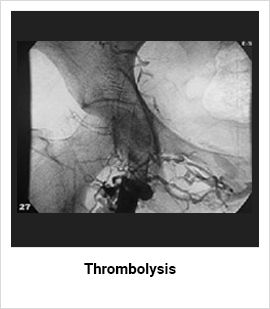 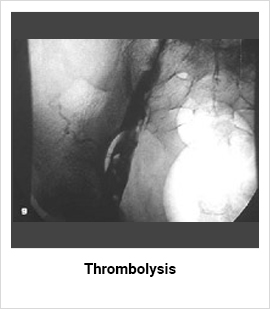 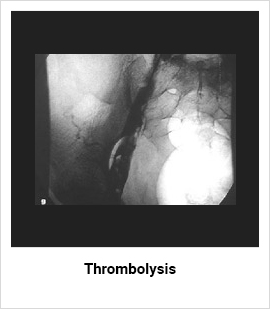 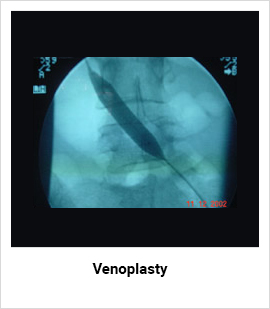 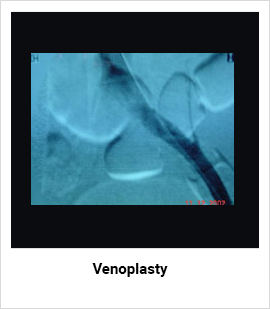 Pharmacologic dissolution of thrombus from the deep venous system appears to be an ideal goal of treatment which has the potential of eliminating deep venous obstruction and maintaining valvular function.

Q. Who is at risk for deep vein thrombosis?

A. Some people are more likely than others to develop thrombosis. Those at risk include

Unfractionated heparin (UFH) has been used for over 50 years in the prevention and treatment of thrombosis. For the treatment of deep-vein thrombosis (DVT) and pulmonary embolism (PE), it is administered by intravenous infusion (i.e. it is infused over a period of time into your vein) and has a rapid anticoagulant effect. You have to be in hospital to receive this treatment. Low-dose UFH is commonly used for prevention of thrombosis (thromboprophylaxis) in patients who are undergoing general surgery, but it is less effective than other forms of prevention in high-risk patients who are undergoing major orthopedic surgery (e.g. hip or knee replacement surgery).

UFH is associated with a risk of bleeding, heparin-induced thrombocytopenia (low platelet count in the blood) and local reactions in the skin around the site of infusion. Long-term use of UFH may also be associated with an increased risk of osteoporosis (loss of bone tissue leading to brittle bones). If you experience any side effects, you must consult your physician.

Before you start taking UFH, you may be asked to stop taking any other treatments that may increase your risk of bleeding (e.g. other anticoagulant and platelet inhibitors, such as aspirin or nonsteroidal anti-inflammatory drugs). If your physician considers it is necessary for you to continue taking these treatments while you are taking UFH, he/she is likely to ensure that you are monitored very carefully.

If you are receiving treatment with UFH, the dose you receive has to be regularly monitored and adjusted to ensure that you are sufficiently protected from thrombosis forming in your veins. Your physician will conduct a blood test (the activated partial thromboplastin time, or aPTT, test) 6 hours after the first dose and at least once a day thereafter to ensure that you are receiving the correct dose of UFH.

Low-molecular-weight heparin (LMWH) is derived from unfractionated heparin (UFH). It is injected under the skin (i.e. subcutaneous injection) and has a rapid anticoagulant (anticlotting) effect. LMWH has several advantages over UFH, including a predictable response to the dose of drug and a longer-lasting effect. This means that it can be administered only once or twice a day. It is also more convenient to inject under the skin than into a vein, which means that you may be able to inject yourself at home rather than having to go to hospital. LMWH is a highly effective and generally safe form of prevention (thromboprophylaxis) and treatment.

LMWH is associated with a small risk of bleeding (most commonly minor bleeding), thrombocytopenia (a low platelet count in the blood) and osteoporosis (loss of bone tissue leading to brittle bones). These side effects with LMWH are rare, with bleeding being the most common, but if you experience any side effects, you must consult your physician.

Before you start taking LMWH, you may be asked to stop taking any other treatments that could increase your risk of bleeding (e.g. other anticoagulant and platelet inhibitors). If your physician considers it is necessary for you to continue undergoing these treatments while you are taking LMWH, he/she is likely to ensure that you are monitored very carefully.

LMWH is injected at a fixed dose decided in accordance with your weight. There is no need for your physician to monitor or adjust the amount of drug injected once the correct dose has been found (using a blood-clotting test), unless you are pregnant, have kidney failure, weigh more than 100 kg, or are a child.

The oral anticoagulant warfarin has been used successfully for over 50 years in the prevention of thrombosis.

Treatment of thrombosis using warfarin is usually started while you are in hospital and can be continued after you are discharged. Warfarin is generally safe; however, it is not effective until at least 3 days after you have taken it and it is only effective within a narrow range of doses (called a therapeutic window). For this reason, when you are first diagnosed with a deep-vein thrombosis (DVT) or pulmonary embolism (PE), you will be given either unfractionated heparin or low-molecular weight heparin together with warfarin for the first few days (up to 1 week) until your blood test shows that the warfarin dosage is effective.

warfarin is associated with a risk of bleeding complications. It may also cause rash, nausea and diarrhea. If you experience any side effects, you must consult your physician. Warfarin should be avoided during pregnancy.

You should inform your physician if you are taking any of these drugs or dietary supplements and you are prescribed warfarin. You should also consult your physician for more complete advice on the drugs likely to interact with warfarin, and whether it is necessary to adjust your diet in order to avoid foods high in vitamin K.

If you are prescribed warfarin, you will usually be monitored frequently and closely to minimize the risk of serious bleeding complications. Your physician may also periodically conduct a blood test (PT/INR) to ensure that you are receiving the correct dose of warfarin. The standardized method for reporting the results of this test is called the international normalized ratio (INR). The aim of your treatment will be to keep your INR within a certain range.

These medications have been in the market since 2010. The major advantage is that they do not require any monitoring or major dose adjustments. The bleeding incidence is also low. Now majority og the NOACs have an Antidote if bleeding occurs. The disadvantage is the cost. 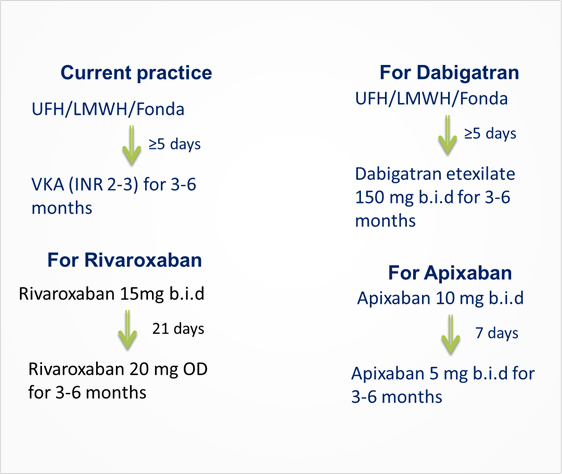 Thrombolytic medications break down the blood clot, i.e. they cause the clot to disintegrate. They are usually used in combination with anticoagulant. These agents are very expensive and are associated with a high incidence of bleeding. They are not necessary for most patients with pulmonary embolism, but can be life-saving in patients with a very large pulmonary embolism that obstructs the flow of blood to the lungs.

Thrombectomy is the surgical removal of a thrombosis. This technique is of limited use for blood clots in veins and is 50% successful in preventing a further thrombosis.

IVC Filters are used to filter clots in the blood so that they do not go into the pulmonary circulation. This is used to prevent sudden death due to Pulmonary Embolism.

IVC Filters are used to filter clots in the blood so that they do not go into the pulmonary circulation. This is used to prevent sudden death due to Pulmonary Embolism. 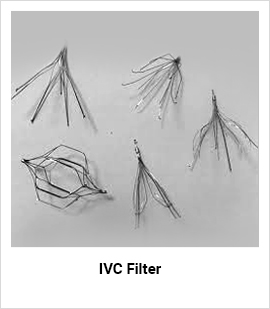 Partial interruption of the inferior vena cava (the vein that carries blood from the lower body to the right side of the heart) using clips, sutures (stitches) or filters prevents the blood clot from reaching the lung. This technique is usually considered in situations where anticoagulant medication cannot be used because of bleeding, or in situations of repeated thrombosis despite the use of antithrombotic medication.